It was the sixth WOW Community in Malawi I had visited that week, and the sixth rape crisis support group I was meeting. These women, like the other ones I had met, beckoned me to sit in their circle as they recounted stories of healing, horror, and progress.

I heard about a 70 year-old woman who was raped by a young man at knife-point on Christmas day. About preschool aged girls sexually abused by predatory males, women attacked on their treks to fetch water, wives diminished by their husbands, beaten by male relatives, and bodies broken from birthing babies year after year, after year because they aren’t allowed to say “no”.

When I asked these women how many of them had been victims of abuse, each of the forty or so raised her hand. What was going on? Why, in the year 2013, was abuse and discrimination a daily reality for hundreds of thousands of women across sub-Saharan Africa?

WOMEN WITH A MISSION

That dire reality is exactly why these women were gathered before me. To speak out against such violence and perpetual second-class treatment. To offer a place for victims to find support and healing, and to form a platform to educate their communities so the next generation of Africans learn differently. “Since it is against us women that this violence is happening, we must be the ones to put a stop to it.” I was told by the chair of the group.

And putting a stop to it they are, armed with little more than the Word of God and t-shirts.

Rape Crisis Counselling (or Gender-based Violence) groups across our WOW Communities have almost unbelievably brought down the prevalence of violence in their communities. Going from as many as 70 reported cases a month to almost zero. Wearing their uniforms, t-shirts that read Silent No More, We Will Speak Out, the members are easily identifiable to victims, police services, and clinics. (Even receiving line-skipping privileges at the latter two). These women help victims report the crime, receive medical attention, and provide ongoing spiritual and practical support. They ensure perpetrators are publically shamed and that they carry out the full terms of their sentences. They are asked to speak in schools, community meetings, and public events. Now, even male members are joining their cause. The ultimate impact? “We are starting to feel safe in our homes, in our communities.”

The more time I spent in African communities, the more I realized how critical it was to liberate the African woman. Liberate her from cultural practises that inherently make her a beast of burden, liberate her from predatory males who wish to harm her, liberate her from poverty so she never has to choose between selling her body or starving her children, 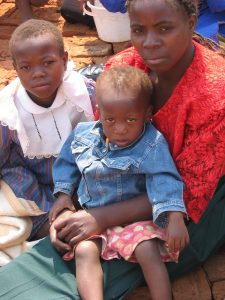 liberate her from ignorance, so she is educated and possesses options. Most of all, liberate her from a life of hopelessness, a life we all face without the redeeming love of Christ our Father.

The women I met were the strongest, most resilient I had ever known. They were the heart of their families and communities, both of which I’m sure would collapse without them. God tells us in the first chapter of James that the purest, more precious form of worship to Him is this: to look after orphans and widows in their distress and to keep oneself from being polluted by the world. That’s it. No offering, fasting, meditation, church construction, bible-verse memorizing compares with it. In caring for vulnerable women and children we honour God in the highest form.

As I left the village, I had the chance to speak with the local police officer, Alek Lazalo. He was a member of the gender-based violence group and told me about his heart for peace, his lovely wife and four children, and his belief that God created man and woman equally in His image. Born and raised in a Christian family, Alek uses his position to help make arrests against perpetrators and counsel other men to treat their wives with respect and dignity.

Becoming a WOW Community Sponsor allows you to support Rape Crisis groups like this one.

Further reading:
Silent No More success story in Mtandile
More from our Revelations from Africa series