Remembering The Power of Prayer How long has it been since you sincerely, desperately prayed for someone? In my case it’s been more than a while. But there we were, Kathy and I, 700 miles north of the Arctic Circle, and in the course of three days we were faced with three desperate prayer needs.

One was a young man who had just moved to Arctic Bay and he had a profound sense of his spiritual emptiness. As I prayed with him the tears rolled down his face and he confessed his sin and his need of Jesus. I was touched at his humility and child-like faith. After all, here was a guy who could command a dog team and head out into the arctic wilderness to hunt whales!

Then there was a desperately sick old Inuk who could hardly breathe nor could he stand. We prayed. A moment later his wan face filled with colour and he stood up, skipping over to the kitchen to the total amazement of his weathered wife. “He can’t do that!” she exclaimed in Inuktitut.

Then there was the desperately depressed 23yr old sobbing like his heart would break. He was an orphan  without work or hope. Some of the youth thought he was suicidal. Pastor Sam Willy and I prayed with him for a long time. Slowly his wracking sobs subsided. An hour later someone offered him a job. I don’t know about you but it sure helps my faith to know that prayer is more than speech-making or wishful thinking. It’s humbling to know that “God hears and answers prayer!” 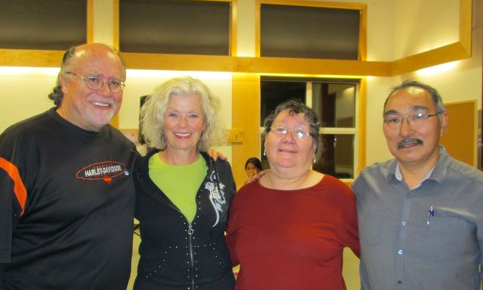