When 28 year-old Margaret Jackson told her husband she was HIV positive, he abandoned her and took their two children with him. Alone, sick, and with no way to afford rent, Margaret had to leave the only village she had ever known to find shelter in the peri-urban slum of Mgona, Malawi.

A LONELY EXISTENCE IN A BUSY CITY SLUM

Finding a place to call home has not been easy for Margaret, the severe nature of her illness was too much for the friend who initially brought her to Mgona. Shortly after arriving, her friend’s husband told Margaret she would have to live elsewhere. A lady with three children took Margaret in for a while, but that arrangement was also short-lived. When we visited Margaret in October, she told us she was now living with a 20 year old woman named Sakachina. In an effort to support both herself and Margaret, Sakachina gathers and sells mangos in the markets most days. 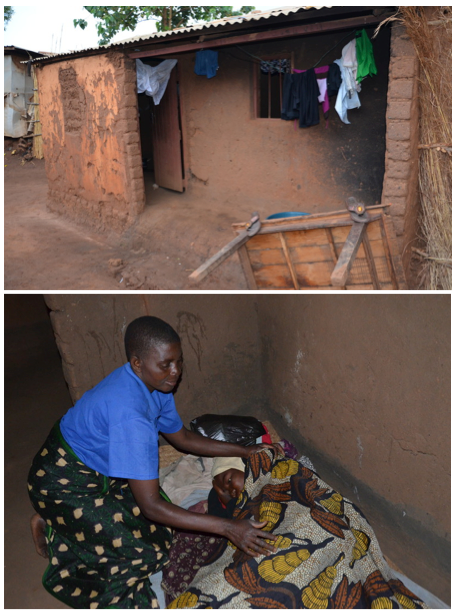 Life in an urban slum is very different from the village Margaret grew up in. Unlike a home village where life-long neighbours and extended family may step in to care for their vulnerable, slums are full of displaced people that have congregated from a number of places. Community ties break down and an attitude of “every man for himself” emerges. With Sakachina gone most of the time, Margaret faced the pain of living with HIV alone. This is why in peri-urban slums like Mgona, home-based care is especially important.

In August 2012 Margaret registered as a home-based care patient through Visionledd. When our volunteers first assessed her, she was so ill that swallowing even porridge was impossible. As a critically ill patient, home-based care volunteers started visiting Margaret several times a week. Through volunteers like Jean, Margaret now receives relief packs, basic painkillers, some food, and transportation to the hospital to receive her antiretroviral therapy (ARVs).

Though her feet are still swollen, Jean told us that they have seen vast improvements in Margaret’s heath. Margaret can now eat porridge and will soon be able to eat small, hard foods again. If her health continues to progress, home-based care visits will be needed just once a week, and eventually Margaret can join the support group for people living with HIV & AIDS. But more than just some physical relief, Margaret has found a renewed sense of hope, belonging, and love from the care of the volunteers. Working in pairs, as one volunteer cooks, cleans and washes, another sits with Margaret and encourages her through prayer, reading the Bible, and singing the occasional hymn. Since Margaret cannot leave her home yet, Jean told us they must “bring church to her”.